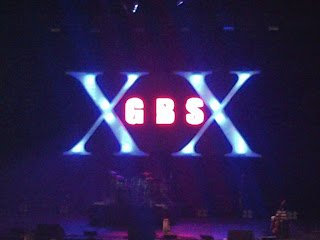 On Thursday evening, Londoners were treated to a very special birthday party at Budweiser Gardens – it’s been 20 years since the ‘birth’ of Newfoundland’s own Great Big Sea, and this high energy folk group was in the mood to celebrate their special milestone with the thousands of fans who filled the RBC theatre.

Opening the show with the up tempo “Ordinary Day”, it didn’t take long for the entire audience to rise to their feet, singing, clapping and bouncing along to the music. Those who are regular concert goers in Londontown know that we tend to be a mellow group who often sit through entire concerts perfectly content to listen in relative calm. Oh we clap, and we sing, but standing....now that’s a lot to ask. Alan Doyle might have remembered that from previous visits, because he encouraged everyone to get up and dance often as the band played hit after hit, and this crowd was happy to oblige.

The evening was a walk down memory lane with old favourites mixed in with a few not so well known numbers. The band’s first big break – a commercial for Newfoundland Telecom – was shown on the big screen behind the band, leading into “What Are You At?” which sold ‘dozens’ of copies in those early days according to Doyle.

One of the most personal moments of the night was also one of the funniest as Doyle mocked bandmate Sean McCann for popping a couple of ribs out of place while sleeping the night before. While the mocking seemed to be a joke at first, the crowd quickly realized it was indeed true as McCann gave a shout out to the Core Medical Group for taking good care of him and his broken ribs earlier in the day. Sharing that he was on so many meds, he couldn’t really feel anything at that moment, the jokes began flying that the band was perhaps starting to show their age. The best joke of the night – “maybe we could land a Cialis commercial!  ‘When Bob’s up, he can’t get down’. If you don’t get that joke...why are you reading a GBS concert review?!

If McCann was struggling, it certainly didn’t show as he performed powerful solos which captivated the audience so well, you could hear a pin drop in between verses.  As much as GBS is known for their high energy tunes, their ballads highlight the group’s incredible harmonies. At times, it was hard to remember if we were on King St. in London, or George St. in Saint John’s, NL.

Original band member Bob Hallett wowed the crowd not only by playing seven different instruments throughout the evening, but also by flawlessly performing ‘Come and I Will Sing You’ which is perhaps one of the most lyrically difficult songs ever written. Think ‘12 Days of Christmas’ on steroids.

For all the ribbing about the band getting older, the fact that they put on a 3 hour show with one intermission and no opening acts suggests that the group still has plenty of energy left for their fans. I was exhausted by the night’s end, and I didn’t do half as much work as they did!

This night had something for everyone – a chance to belt out drinking songs as loud as you wanted, some traditional folk songs that made you stop and imagine the vivid scenes being painted for you, funny banter with one of the most down to earth bands out there – but most of all, it allowed the audience, ranging in age from single digit youngsters to octogenarians, to feel like they were part of their very own Newfoundland Kitchen Party.

Thank you, Budweiser Gardens, not only for allowing me to attend and share my personal reflections on the night, but for continuing to bring quality shows to town. I look forward to celebrating many more milestones with Great Big Sea and Bud Gardens as we all age gracefully together. 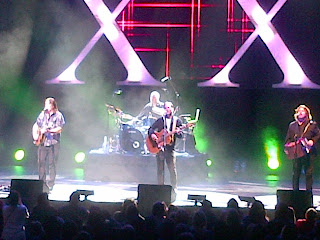