The blog that didn't want to happen...

I am watching something I bet no one else I know is watching right now….the Tony Awards. Most people would say, “The what??” My husband is so excited, he’s chosen to spend this time breaking down boxes and putting out the garbage J The Tony’s are, of course, Broadway’s version of the Oscars, and darn it, they are where I should be! Broadway is my first love…there’s nothing like live theatre where anything can happen at any moment. Like the microphone that was just run out to a performer whose hidden mike wasn’t working…all actors dread these things, but a good one will never let it show…this performer is a pro and didn’t miss a beat!

I’ve been out of touch with the shows lately…in fact there are a few nominated that I’ve never even heard of which means I need to get my act together. They all look fantastic! If only I had the budget to fly to NYC once a month or so! I’d be in my glory!

Got my hair done yesterday, hence, the new profile pic. I love it when my hair is straight, and the only day that it is truly straight is the day my stylist, Tom, does it for me, so I decided to take a few photos for posterity. It’ll be a couple of months before it looks good again! I have been going to Tom for 10 years or so, and he’s been telling me to get a straightening iron for all 10 of those years. I have trouble spending big bucks on myself (the hairdo is expensive enough), so forking out $300 for a straightening iron is a little hard to justify. Maybe someday…until then, I look forward to my bi-monthly ‘do.

I’m proud of myself, because for the first time in months I did not check my work email once this weekend. In fact, I haven’t checked it since Thursday, because I was out of the office on Friday. It’s been nice, and I think I need to force myself to do it more often. I can only imagine what I’m walking into tomorrow, but I’ve decided not to worry about that until tomorrow!

So, for lack of anything better to talk about, I need to share with you the funniest thing I have seen in a long time. Bear in mind, when hubby first showed me this link, I thought it would be something stupid that I would hate (love you honey). But it is hilarious! It is an actual Amazon.com page, advertising a t-shirt. What’s so funny about that, you may be asking? Well, I encourage you to read the reviews of this t-shirt…there are over 1000 of them! And they are so funny!!! The t-shirt is this ugly as hell thing with 3 wolves and a moon and obviously one day, someone thought it would be funny to write a review on how awesome this shirt is…and it’s snowballed from there. Here’s a sampling of the reviews: 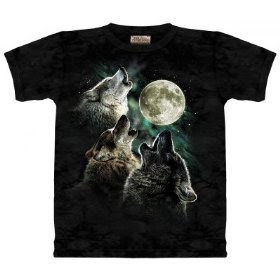 So I'm looking for threads that say, "Hey baby...I'm real boss!" when I stumble upon this epic creation. The wolves spoke to me in a language all their own; it was like German, Mongol, and Bitchin all mixed together. I mean, one wolf howlin at the moon is major...but three??? I ordered next-day air (if only there was same day!), and, of course, a size smaller than usual to ensure the closeness of the wolves to my chest hair. When the package arrived, I tore it open, and I SWEAR angels sang. I think it was Freebird. I immediately removed my "No Fat Chicks" shirt, and replaced it with this finery. Lemme tell you: AW YEAH. I'll spare the details of my conquests since I started wearing this shirt; suffice to say, I'm swimming in a sea of babes the likes of which are usually found on those K-Tel infomercials. I'm also more confident at work, and expect to be promoted to cashier soon. I owe everything to this shirt (I should say "shirts", since I now own 23 of them).
***********************************************************************************
This item has wolves on it which makes it intrinsically sweet and worth 5 stars by itself, but once I tried it on, that's when the magic happened. After checking to ensure that the shirt would properly cover my girth, I walked from my trailer to Wal-mart with the shirt on and was immediately approached by women. The women knew from the wolves on my shirt that I, like a wolf, am a mysterious loner who knows how to 'howl at the moon' from time to time (if you catch my drift!). The women that approached me wanted to know if I would be their boyfriend and/or give them money for something they called meth. I told them no, because they didn't have enough teeth, and frankly a man with a wolf-shirt shouldn't settle for the first thing that comes to him. I arrived at Wal-mart, mounted my courtesy-scooter (walking is such a drag!) sitting side saddle so that my wolves would show. While I was browsing tube socks, I could hear aroused asthmatic breathing behind me. I turned around to see a slightly sweaty dream in sweatpants and flip-flops standing there. She told me she liked the wolves on my shirt, I told her I wanted to howl at her moon. She offered me a swig from her mountain dew, and I drove my scooter, with her shuffling along side out the door and into the rest of our lives. Thank you wolf shirt. Pros: Fits my girthy frame, has wolves on it, attracts women Cons: Only 3 wolves (could probably use a few more on the 'guns'), cannot see wolves when sitting with arms crossed, wolves would have been better if they glowed in the dark.
***********************************************************************************

From now on, when the local news comes to interview me about drug arrests and sewage problems in my neighborhood, I will wear this shirt instead of the stained "Tigger" shirt I previously wore on such occasions.

Want to read more? Come on, you know you do…

Well, this blog has officially taken me 6 days to write, and contains absolutely nothing of value, so time to give it up. I need sleep and I'm sure I'll be in much better shape to write the next one. Thanks for suffering through...
Posted by Kathy at 9:04 PM